With Christmas around the corner, ZEE5 brings you a sack-full of entertainment with Rangbaaz Phirse, Saand Ki Aankh & Ragini MMS Returns 2, etc. 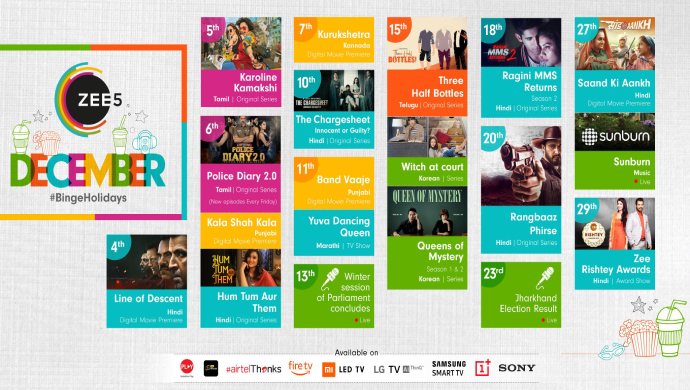 In November, ZEE5 put together an impressive line-up of releases. From the quirky romantic comedy Love Bites with Anshuman Malhotra to the blockbuster social comedy Dream Girl with Ayushmann Khurrana, there was something for everyone. More recently, the highly anticipated Season 2 of ZEE5 and ALTBalaji’s Broken But Beautiful released to great reviews. The Tamil Original Police Diary 2.0, which began last month is set to release more episodes throughout December.

Watch a short glimpse of shows in the line-up for December.

In December, ZEE5 is turning up the heat with some big-ticket action releases set for release. First up is Line of Descent set to release on December 4. It stars Ronit Roy, Abhay Deol, Prem Chopra and Neeraj Kabi in prominent roles. Hollywood actor, Brendan Fraser, from George Of The Jungle and The Mummy also plays a vital role in this movie about gangsters in Gurgaon.

In other regional content Band Vaaje and Kala Shah Kala, both Punjabi films are set to have their digital premieres on ZEE5. Apart from this, ZEE5 debuts two new and popular K-Dramas (Korean Dramas) — Witch At Court and Queens Of Mystery. For fans of EDM music, Sunburn 2019 will be streaming live on ZEE5 as well as the ZEE Rishtey Awards.

#ActionUnlimited: Here's A List Of Blockbuster Action Movies To Binge-Watch On ZEE5