"You will see a complete change of heart in Sheena in Kehne Ko Humsafar Season 3," revealed Suchitra Pillai in an exclusive interview. 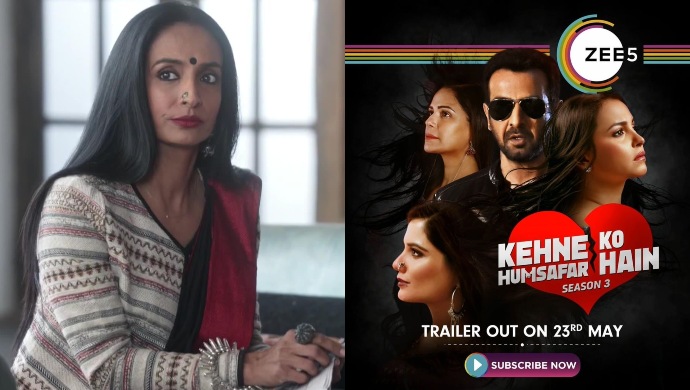 All set to hit the screens very soon, Kehne Ko Humsafar Hain Season 3 has a lot of new exciting twists in store for you. The romantic, emotional family-drama series, depicting #RishtonKiUljhan, revolves around the lives of Poonam Mehra (Gurdip Punjj), Rohit Mehra (Ronit Bose Roy), and Ananya Sharma (Mona Singh). Actress Suchitra Pillai essays the role of Poonam’s sister Sheena, she lives a colourful life and lives it on her own terms. In an exclusive interview with ZEE5, Suchitra revealed how different her character and the series will be in the third sequel.

Watch the gripping and riveting trailer of Season 3 here:

1. As a strong independent woman, how does Sheena influence young women out there in Season 3?

In the first two seasons also Sheena has had such a fantastic response because she’s such a strong woman and doesn’t take nonsense from anybody. She knows what she wants and she doesn’t give a damn about people’s opinions, which in today’s day and age, I think, is like many women who are waking up to realise that they are not answerable to anyone. She has three divorces behind, but she is unapologetic about it. She has strong opinions but does not mean that only my view is the right view. She brings a modern-day standpoint to the story. That’s how she influences and that’s why she is loved by the audience.

2. How much does Suchitra relate to Sheena’s character in real life?

Well, the fact that I’ve only had one divorce and not three like Sheena, is the only difference. But, like her, I am also a person who takes people for who they are. There’s no point in dilly-dallying with petty stuff. In real life, I’m not one to sit and ponder upon things which don’t really matter and I think that Sheena is like that too. She likes to call a spade a spade. She’s someone who’s straight to the point. Both of us have a sense of humour and are comfortable in front of a crowd. Otherwise, I don’t like confrontations, but Sheena doesn’t mind being in that situation.

3. Sheena has come around from hating Ananya to respecting her as a strong woman. How did that switch happen?

Of course, because Poonam is my sister and she went through a lot in the first two seasons, so the first reaction towards Ananya, who caused the pain was hatred. But in a way, Sheena herself has been through so much, so now she sees Ananya in a different light and understands where she is coming from. And it takes her a while to realise how devoted Ananya was to him and what she did for him. So, that’s Sheena, who tells herself to wake up, smell the coffee, and be a friend to Ananya.

4. Sheena encourages Poonam to move on after her divorce. What advice would Suchitra give to those going through it?

Oh, I always say this to everyone, my friends and people who I know are going through the same because I also got divorced very young, after a 7-year-marriage. Do not lose faith in love and in the institution of marriage! Don’t become bitter because that’s when you’re closing the doors completely. When I was 27, I always had this positive feeling that I know there’s someone for me, I know I’m going to have a family. So, someone down the line, you will come around. Do not get bitter!

5. Sheena’s mantra in life is to live and enjoy life even after a tragedy. What is your mantra in real life?

My mantra, when it comes to ambition, is to reach for the stars because there is no force to stop you. As far as life is concerned, I believe in living in the present moment. Do not waste your time and energy on taking nonsense because you have only one life. Over the last few years, I consider myself blessed that I have been there with people who have gone. I held my father and my close uncle when they passed away. So, you realise how fickle life is. Here today, gone tomorrow. And then, how much time do we waste on anger, issues, petty nonsense, bickering gossip, etc. All of this isn’t worth it when everything is so finite and we have only so much time on earth. So, I try to keep my mind positive always.

6. What are the positive changes that the audience can expect in Sheena in Season 3?

Ohh! Sheena changes her complete viewpoint, just wait and watch! Most of it flushed out of it but you will see a complete change of heart in Sheena in Season 3. She was a bit of a movement in the past. But she continues to be Rohit’s friend and advises him on the young girl he is with now. Sheena is always there to shake Poonam up and spice up her life a little bit, even after menopause, with Abhimanyu. In her personal life also you will see a lot from Sheena.

7. How is your experience working with Gurdip Punjj, Mona Singh and Ronit Roy?

Gurdip is a darling! She is a close friend even off-set. We continued to keep in touch post-shoot as well. Ronit and his brother. I know for years together. So that comfort level is really there in our scenes. Mona is fantastic! She’s really such a bindaas chick. Though I don’t have many scenes, whenever we do shoot together, it’s a really good give-and-take between us as two actors. The best bond I have is with Gurdip. We can sit for hours in the vanity van and pass time together.

Stay tuned for Suchitra Pillai’s performance as Sheena in Season. Watch all the episodes of Kehne Ko Humsafar Hain only on ZEE5.