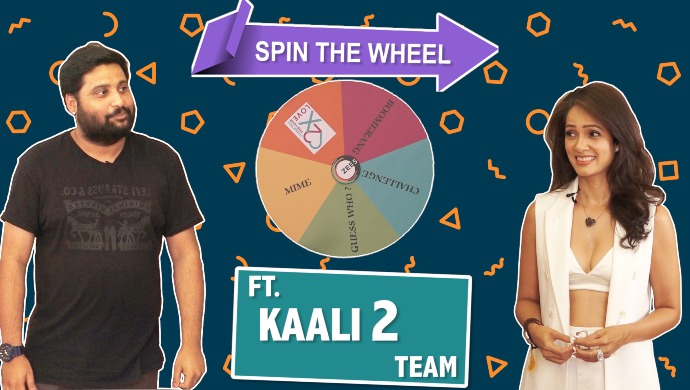 The second season of ZEE5 Original action thriller series Kaali is slated to premiere on 27 March 2020. Featuring Paoli Dam in and as Kaali, Vidya Malavade as Officer Gupta, and Rahul Banerjee as Aniket, the story revolves around a helpless yet strong mother who races against time and goes to any extent in order to save her only son. Directed by Rohan Ghose, the psychological thriller spans across one night and is sure to keep you at the edge of your seat. During its promotions, ZEE5 played some interesting games with Vidya and Rohan. Have a look at what spun behind-the-scenes!

Watch the video of the ‘Spin The Wheel’ game here:

Host Dheeraj Juneja introduces the stars and then introduces them to the ‘Spin The Wheel’ challenge. Vidya Malavade goes first after threatening the host with, “You better be good to me, haan!” She turns out to be a sport as she waves a pair of red glittery pom-poms for an Instagram story when the wheel stops at ‘boomerang’. Rohan comments that she keeps boomeranging on the set when Vidya exclaims that she is so good at this!

Next is Rohan Ghose’s turn. He spins the wheel and blinks his eyes rapidly, not knowing what to hope for until it stops on ‘challenge’! The needle slightly moves on to ‘Guess Who?’ but never mind. Dheeraj picks a cue card on which a simple tongue-twister is written, or so he claims! He asks Rohan to say, “Stupid superstition”, 10 times very fast, without fumbling or ceasing. While the imaginary clock is ticking, Rohan manages to say it 6 times but then, one slip of the tongue and he fails! Nonetheless, Dheeraj and Vidya compliment him.

Go ahead and do ‘Spin The Wheel’ challenge with your family and friends. Let us know in the comments section below about your funny experiences!

Catch more fun and games with Team Kaali 2 in the upcoming videos, streaming exclusively for you on ZEE5 Originals!

Don’t forget to get all the live updates on Coronavirus on ZEE5 News section, streaming now!

Rajesh Kumar: Bhalla Calling Bhalla Looks At The Humorous Side Of The Lockdown