Ghoomketu, the story of a man who comes to Mumbai to become a film-writer, has charmed its way to the hearts of audiences and critics. 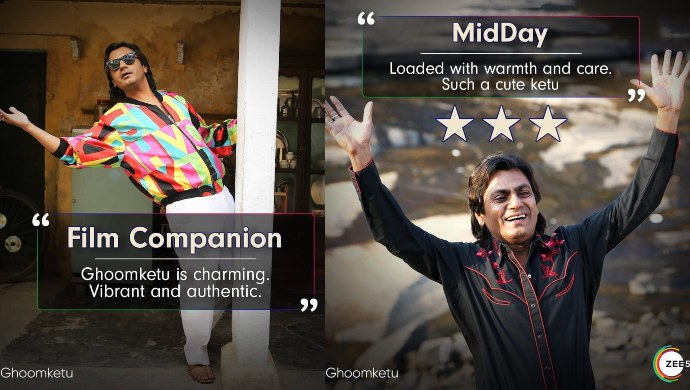 Ghoomketu starring Nawazuddin Siddiqui and Anurag Kashyap is seen in one of their funniest roles on screen. The movie skipped a theatrical release and premiered on ZEE5 on 22 May 2020. Since then the love and affection for Ghoomketu has been pouring in. Not to mention the surprising number of special appearances by popular actors in this film.

Watch the trailer for the film here.

Here are some of the reviews for the film. While Mid-day found the film ‘loaded with warmth and love’ and even changed the name of Ghoomketu to cute Ketu. Film companion found the film ‘charming, vibrant and authentic’. Bookmyshow said that Ghoomketu is ‘a quirky drama with endearing performances’.

Watch @nawazuddin._siddiqui make his Bollywood dream of being a writer come true in this family entertainer. Do you think #Ghoomketu will find success? Find out now, streaming only on #ZEE5

News 18 found Ghoomketu to be ‘A good mood lifter’. Even India Today said that the film is ‘A dose of laughter everyone needs in this these testing times.’

Spirits will be lifted, stress will be buried 🙏 Have you met #Ghoomketu yet? Now streaming on #ZEE5!#GhoomketuOnZEE5

Because hard times call for harder laughs. Hit like if you agree that #Ghoomketu is @Nawazuddin_S's funniest character till date! Streaming now on #ZEE5. #GhoomketuOnZEE5

Aadar Malik a popular stand-up comedian seen in Comedy Shots shared that he is relating really hard with Ghoomketu who is going throught a writer’s block in the film.

'Write what you know' is usually helpful when you actually know stuff. Relating hard to Ghoomketu, with my writer's block. Nawazuddin Siddiqui is brilliant as always. Go check it out right now, you won't regret it!#GhoomketuOnZEE5https://t.co/5LtsW25KrB

Omar Qureshi a popular TV host and critic found Nawazuddin’s character to be motivating under lockdown.

#Lockdown can’t be all bad if you manage a pinch of motivation & a few dreams being realized? #Ghoomketu offers us a big, bold @Nawazuddin_S in a fearless avatar. Stream in some fun. Cheers. @ZEE5Premium #GhoomketuonZEE5 https://t.co/Z9EeYkgZLG pic.twitter.com/1bjKnfS1Ac

What did you think of the film Ghoomketu after watching it? Let us know in the comments below.

Meanwhile watch out for the upcoming digital premiere of Chintu Ka Birthday with Tillotama Shome and Vinay Pathak releasing on 5 June 2020 on ZEE5.