Nawazuddin Siddiqui plays an aspiring Bollywood writer, while Anurag Kashyap is a corrupt cop. Catch their sheer comic brilliance only on ZEE5. 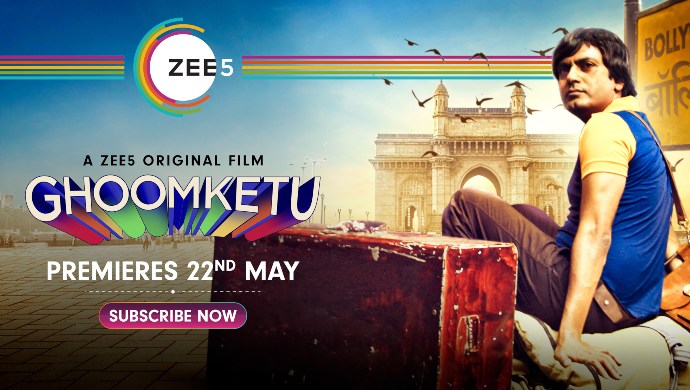 An amalgamation of Pushpendra Nath Misra’s love for humour and for Bollywood has taken form into this brilliant dark comedy film, starring Nawazuddin Siddiqui in and as Ghoomketu, ZEE5’s biggest direct-to-digital blockbuster original film, premiers on May 22, 2020. Inspired by director Pushpendra’s own life and struggling times, the movie follows the life of an aspiring Bollywood writer, who runs away from his house. Producer-director-actor Anurag Kashyap is seen as a corrupt police inspector, while Ragini Khanna plays Ghoomi’s shy wife. Veterans like Raghubir Yadav and Brijendra Kala play supporting roles with utmost excellence. Read further for the full movie review.

Watch the exciting and out-of-the-box trailer of Ghoomketu here:

Probably the cheesiest man on earth, Ghoomketu will put a smile on your face with his over-the-top hairstyle from the word go. Originally, hailing from Mahona, a small village in Uttar Pradesh, he runs away to Mumbai to try his luck in films as an aspiring screenwriter. In his introduction scene, the highlight is undoubtedly the ‘Gudgudi’ magazine. Its chief editor, Joshi is played by Brijendra Kala, who banters with Ghoomketu and gives him a self-published book titled, ‘How to be a Bollywood writer in 30 days’.

When he runs away from home, stealing two toothbrushes, and tubes of toothpaste, two bathing and washing soap bars from his Dadda’s (Raghubir Yadav) shop, he goes to the police station to file a missing report. Santo Bua (Ila Arun) and Guddan chacha (Swanand Kirkire), accompany Dadda and deliver the most hilarious dialogues ever while reporting a missing case of their son. Kudos to the dialogue writer, Pushpendra for giving us a chunky glimpse of the interiors of U.P., with its peculiar slang and unabashed tonality.

Only Nawazuddin can pull off such a chhapri character while being extremely likeable. Don’t be surprised if you find yourself rooting for Ghoomketu, even when he behaves in the most uncivilised manner. His comic timing in the monologue, at his table, is impeccable as he recalls Amitabh Bachchan’s rapid English speech before the song “My Name Is Anthony Gonsalves” in Amar Akbar Anthony (1977). He also derives inspiration from Arnold Schwarzenegger’s dialogue “I’ll be back” in Terminator (1984). But, Ghoomketu gets nowhere close to it.

Inspector Badlani (Anurag Kashyap) is assigned Ghoomketu’s missing case. But he doesn’t have to do much when Ghoomi himself walks into the Matunga police station, with honey and caramel coloured highlights in his hair! The interrogation pans out like a pendulum as your eyes oscillate between the two satirical actors. The script of Ghoomketu’s films ‘Khooni Bathroom’ and ‘Sauteli Maa’ gets robbed from a snacks stall due to his carelessness. Badlani asks for his name and learns that he is the guy who has been making his life miserable all this while.

Badlani is conditioned that if he doesn’t find him alive in 30 days, he will be sent on a punishment posting. What happens to Ghoomketu is for you to find out in the movie. But, his wife Janki Devi (Ragini Khanna) brings light and colour into his life. She is the epitome of a typical village girl who holds on to her innocence, after marrying a man she has never seen before. Ragini and Nawazuddin’s instant cute chemistry will have your heart fluttering. In the end, Pushpendra, through Ghoomketu, sends out his admiration for the city of dreams, Mumbai!

To witness the funniest concoction of Pushpendra’s signature style and Nawazuddin’s comedy, watch Ghoomketu only on ZEE5.