Karan proposes marriage to Tipsy over the phone. Truth about Palash and Tipsy's relationship is unveiled and she goes back to him! Find out why! 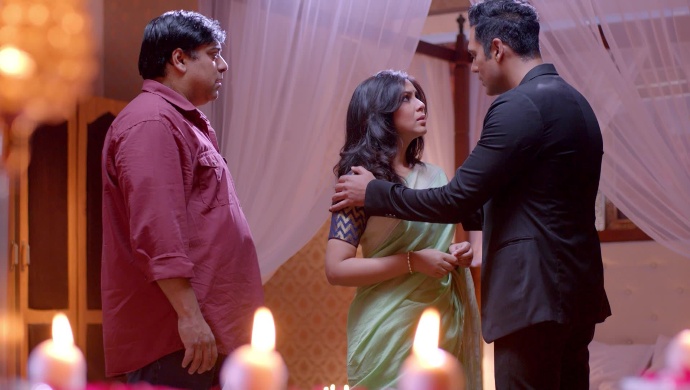 In the previous episodes, Karan and Palash fight over Tipsy at the inauguration of the ‘Veda Rehab Clinic’. She asks Karan to take her away from Palash but refuses to reveal her past to Karan because she loves him. Then, Palash calls Karan to a bar to make him feel jealous of his 10-year long relationship with Tipsy. Karan expresses his jealousy to Vishal and Tipsy talks about her dilemma to Sherry! Later, Karan cancels his trip due to his responsibilities.

In today’s episodes, when Tipsy can’t get through to Karan on the phone. She boards the bus with a disturbed heart. To her annoyance, Romila plonks herself on a seat beside Tipsy. To make Karan run to Tipsy, Romila suggests that she should fake an accident. Tipsy gets fed up and changes her seat only to realise later that she and Romila are sharing the same hotel room. Trying to find another room, she is terrified by a black snake hanging from the door. Romila immediately video calls Karan to show him this!

Karan phones Tipsy and scolds her for not taking care of herself when he is not around. Tipsy answers that if he was so concerned he shouldn’t have cancelled at the last minute. Karan says that he is coming to Tipsy right away, to ask whether she will marry him! Tipsy is stunned and fumbles her words. She then reveals to Sherry that Karan proposed to her. But Palash is present there already and he goes down on one knee with a ring in his hand as soon as he sees Tipsy. The latter reminds her of what he did to her!

Four years ago, Palash had promised to marry her. Tipsy’s father, Appa was in critical condition at the hospital but Palash asked her to stay with him. Making her wait at a hotel, Palash deserts her by ignoring her phone calls. News breaks that Tipsy’s Appa is no more and she breaks down weeping. Today, Palash regrets his choices and begs for a second chance. But, Karan enters the room, affirming that Tipsy doesn’t love Palash, but loves Karan instead. Flipping like a coin in a second, Tipsy asks Karan to leave them alone because she loves Palash!

Karan can’t believe what Tipsy just said and gets depressed. Then, Tipsy yells at Karan, followed by Palash who is elated to have Tipsy back. Suddenly, the police arrive to arrest Palash for drug abuse and illegal cocaine use. When Palash shockingly questions who called them, Tipsy replied, “I called the police!” Karan’s jaw drops in awe of Tipsy’s plan. The latter shows Palash his place for humiliating Karan, Radhika, and Trisha. Tipsy gets Palash behind bars and runs back to Karan. Both of them hug with a sigh of relief!

You can get Coronavirus Pandemic LIVE Updates on ZEE5 News section, streaming now.

Karan-Preeta Vs Karan-Tipsy: 4 Shocking Things They Have In Common In Their Relationships