In the next episode, Preeta tries to see through the sehra and is shocked by what she finds. 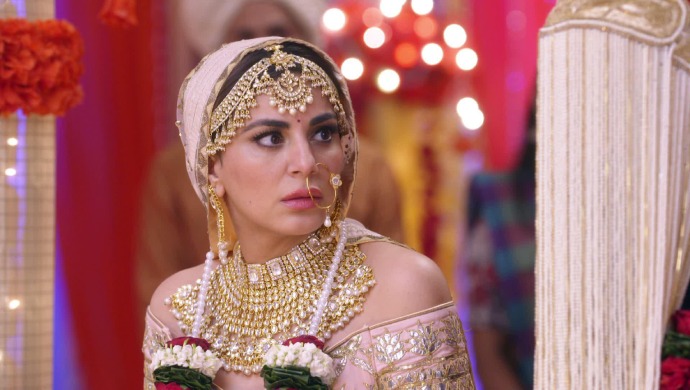 In tonight’s episode of Kumkum Bhagya, Srishti and Biji ask Sammy if Karan is with him. Sammy hesitates but says Karan is not at the wedding. Karan walks out towards the mandap but is shocked to see Rakhi at the wedding. Sammy protects Karan from having his face revealed when he drinks a glass of water. Karan and Preeta sit at the mandap. Preeta remembers her good memories with Karan. But Karan only thinks about the revenge he wants to get on Preeta by marrying her.

Catch a sneak-peek of the next episode here.

In the next episode, Srishti tells Sammy that she never wants to see Prithvi’s face. Sammy tells her that if she sees the person who’s face is behind the sehra, she will be more than happy. Kareena tells Sanjana that now they must focus on getting Karan married. She says luckily Preeta is already getting married. Preeta looks inside the sehra at the mandap and looks shocked. Does Preeta know she is marrying Karan? Stay tuned to find out.