Prachi-Ranbir Or Rhea-Ranbir: Who Will Win This ‘Pyaar Ki Jung’ In Kumkum Bhagya?

Now that a love triangle has formed between Rhea, Ranbir and Prachi, whose love will triumph? Watch clips of all the romantic moments they shared. 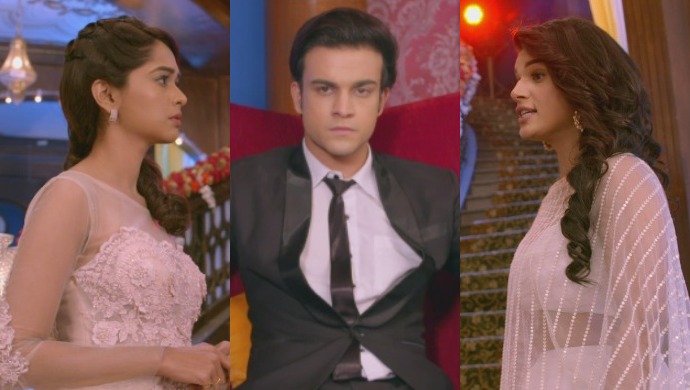 An inevitable love triangle has finally formed on Kumkum Bhagya and yet again, there’s going to be a fight for love. While it was already expected that the two sisters would fight over a boy, looks like it’s finally going to happen. Of course though, one of the sisters is going to be a villain to the other one whether or not they get Ranbir. Prachi and Rhea don’t know yet that they are twins separated at birth. However, they have had this instant dislike for each other that seems to have spanned for too long. Interestingly, while they may hate each other, they sure like the same guy, Ranbir! We have compiled some romantic videos of Ranbir with Prachi as well as Rhea that shows how romance blossomed in the hearts of the two girls for Ranbir Kohli.

When it all began for Rhea and Ranbir

The first time Ranbir realised that he likes Rhea, he tried to make her his girlfriend. However, she asked him to pretend to like Prachi and then break her heart.

The first time Ranbir got close to Prachi

To ensure that he does what Rhea wanted and in order to date her, Ranbir actually went ahead and tried to make Prachi fall for him by getting close to her at the same party. It sure did backfire.

How we can talk about Prachi and Ranbir’s romance without adding this video of the two of them! This is the first time when Prachi realises that she too, has feelings for him.

While there have been several instances of Prachi and Ranbir’s banter, this, by far, is the cutest.

When Rhea assumes that Ranbir likes her back

Although her idea to push Ranbir on Prachi backfired as she ended up falling for him, she has since continued to pursue him under the guidance of Aaliya. In this video, while Ranbir is happy that Prachi trusts him, his words make Rhea believe that she is the one.

Knowing that Prachi likes roses and wants a dramatic gesture by someone, Ranbir takes it upon himself and plans an elaborate plan where he showers her with rose petals.

The present plot of Kumkum Bhagya shows that even Prachi has realised her feelings for Ranbir. Although she does tag her relationship with Ranbir to be that of friendship, it is evident that she has also fallen for him. Basically, both Rhea and Prachi are in love with Ranbir but he only has his heart set on Prachi. Now Rhea knows about it and has done something silly by trying to make him look bad in the eyes of Prachi. Her plan? Well, since Prachi’s character assassination hasn’t worked wonders in the eyes of Ranbir, time to reverse the plan and attack Ranbir instead.

Rhea roped in Maya which brought about a ripple effect as she accused him of sexually molesting him. Rhea’s plan to drive Prachi away from Ranbir and his plan to make Maya reveal the truth has backfired terribly. Not only has Ranbir managed to break Maya’s engagement from a politician’s son but is now also forced to get married to her. How will Prachi and Rhea be able to stop Ranbir and Maya’s wedding? Will they join forces this once to save Ranbir from Maya and her influential family? Or will they use their separate means to do something about Ranbir’s conundrum?

Irrespective, it is going to be an entertaining series of episodes so we do recommend that you follow Kumkum Bhagya for all the drama and entertainment.

For more such entertaining content, watch The Chargesheet: Innocent or Guilty?, now streaming on ZEE5.