#20YearChallenge: Gul Panag recently took to Instagram to share then and now photos, from 1999 and 2019, wearing the same swimsuit at the Maldives. 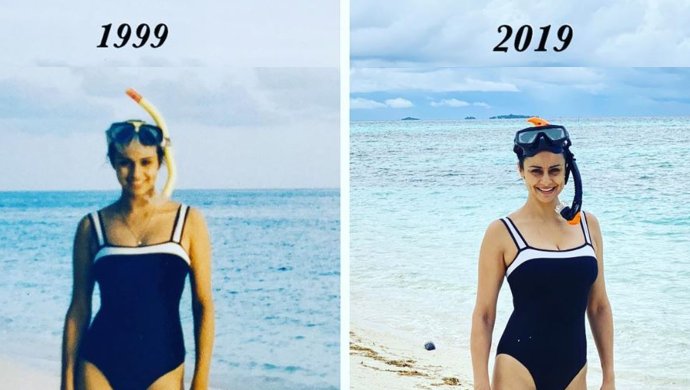 Rangbaaz 2 actress Gul Panag is currently holidaying st the Maldives with her family. On Monday, the former beauty queen dominated the list of trends with a picture she shared recently on Instagram. Over the weekend, Gul posted a collage of two photos, one from 1999 and other one from 2019, both taken at the Maldives wearing the same swimsuit. “Then and now. Back in Maldives after twenty years! My Mark and Spencer swimsuit still going strong,” she captioned the post. Shortly after her new upload, fans and celebrity friends flooded the comments box calling her an ‘inspiration’ while several wrote ‘You haven’t aged a day.’

The 20-year-old photograph and the one taken recently literally show no signs of ageing! The starlet left her followers smitten by her beauty in what is being touted as the #20YearChallenge.

Then and now. 🖤 Back in Maldives after twenty years!! My @marksandspencer swimsuit still going strong ❤️.

Dream Girl star Ayushmann Khurrana commented with a heart emoji while Maanvi Gaggroo wrote, “There’s literally no difference!”. Rasika Dugal expressed her thoughts saying, “Wow. Inspiration!” while Rohit Roy said, “No way!”  Some of the comments received on the post read, “Some people just never grow old,” “You are timeless!” and “Omg you haven’t changed a bit,” amongst thousands of others.

Besides the collage in question, Gul has been posting pictures of her, with her gorgeous son, from their Maldives vacay on the photo-sharing platform. A picture she shared with little one Nihal was captioned, “Getting Nihal out of water is a task. Although grateful that he is a water baby. Unlike his Dad. Took him kayaking for the first time today. All was well till he decided to stand up and look at the ‘maannyy fish.’ Earlier, Gul had posted about snorkeling with Nihal.

Another one featured the mother-son duo enjoying a floating breakfast in the pool. Check out the pictures here:

Getting Nihal out of water is a task🤦🏻‍♀️. Although grateful that he is a water baby. Unlike his Dad 😼. Took him kayaking for the first time today. All was well till he decided to stand up and look at the ‘maannyy fish’ 🐟 🐟🐡. Check out stories for all the action💁🏻‍♀️. P.S. I have another swimsuit. Also @marksandspencer . Maybe they should give me a lifetime supply now?? #Islandlife #VisitMaldives #NaturallyMaldives #Maldivesresorts #Premiumallinclusive #Joyofgiving #Allinclusiveresort #Maldives #Beach #OZENMaadhoo #Indulgence #Exotic #Luxurytravel #Southmaleatoll #OZEN

Think you can take the #20YearChallenge like Gul Panag? Share your entries in the comments box below.

Catch Kajol and Ajay Devgn have a laughter attack with Maniesh Paul.

In the meantime, catch the latest episodes of Movie Masti with Maniesh Paul only on ZEE5.

The Verdict - State Vs Nanavati Is Ruled In Favour Of Binge Watching! Read Reviews Inside