Russell Peters Deported Tour: He Returns To India And Begins The Tour With A Bang In Pune

On the second leg of his India tour, Russell Peters takes his show to Pune, Ahmedabad and Hyderabad. Here's a first person account from the Pune show. 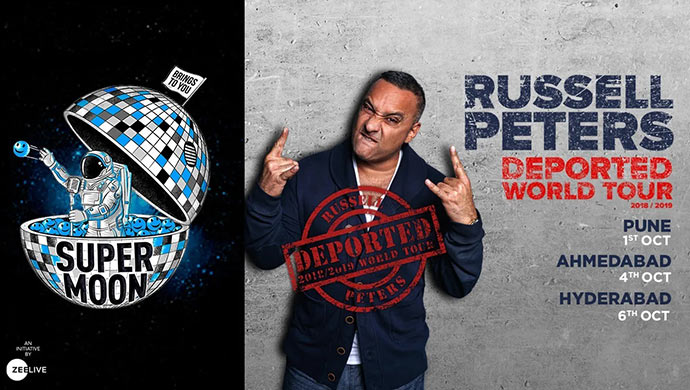 Russell Peters is one of the biggest names in Comedy – ever. He is also the first comedian of Indian origin to make a name for himself internationally. No ethnicity has been spared from his comedic observations on them. One ethnicity he holds closer to his heart and makes most jokes about are Indians or as he calls them ‘my people’. Which is why whenever Russell Peters decides to tour India it is usually a bigger deal than most.

This year he is touring with a two-hour show titled ‘Deported’. This year’s India tour was organised by ZEE Live’s Supermoon which focuses on bringing big ticket acts together. On the first leg of this tour Russell Peters covered Mumbai and on popular demand returned for shows in Pune, Ahmedabad and Hyderabad.

I got tickets for the Pune show at Royal Palms Koregaon, and it was less of a plan and more of an impulse decision to go for the show. I hitched a ride online with a man from Goregaon 4 hours before the show. This could make a super-specific Mumbai-Pune-Mumbai, called Goregaon-Koregaon-Goregaon.

We took it as a challenge to get me there in time. We even synced our restroom stops to save time. We would have reached early if not for a long traffic jam on the road leading straight to the venue. We ditched the car and ‘half ran-half walked’ like the hero of a romantic movie in an airport-ending-scene just to be in time.

Russell Peters brought his A-game where he went super off-script. He is known for picking on people at his shows without offending them somehow. He picked on people who walked in an hour late, white people at the show and himself for wearing a bright orange suit. He didn’t even spare a moth who kept interrupting the performance.

However, the Deported tour feels more like an exploration of his Indian heritage and less about stereotypes. He jokes about learning fluent Punjabi in Canada, somehow. Why Punjabi should be the national language, making his first Indian friend as a child, and why NRIs behave the way they do about India.

He also drops some truth bombs along the way like how every generation of Indians is one generation behind because they live for their parents until this current generation came around and started thinking what we actually want from our lives.

Post-show there was a meet-and-greet session where people were able to sneak in selfies with popular Marathi actors including Sumeet Raghavan, Sachin Pilgaonkar and Shilpa Tulaskar before meeting Russell himself. A surprising line of people also waited to click selfies with the astronaut from the Supermoon logo.

After the show I decided to wait the night at a backpacker hostel before leaving. In the online photos of the hostel it seemed to have a hippie vibe with Pink Floyd and other cool band artworks on the walls, but I was woken up in the morning with ‘Om Jai Jagdish Rock Version’ playing on full volume!

We might be the first generation of Indian kids who are speaking for themselves but I’m not sure if we know what we want to say. With this highly entertaining show already sold out in Hyderabad tomorrow, you just have to keep demanding till he shows up in some other much more obscure Indian city next.

Or you can watch some of the homegrown comedians on ZEE5’s Comedy Shots here.

EXCLUSIVE: Kumkum Bhagya's Mugdha Chaphekar On Co-Star Sriti Jha: I Connect With Her A Lot

Anjum Fakih Wanted To Give Her Life For Shabir Ahluwalia: I Love You Shabbo! Watch Video