In the next episode, Kalyani stops Anupriya from running away from the crime scene. Malhar tells Anupriya to accompany him to the police station. 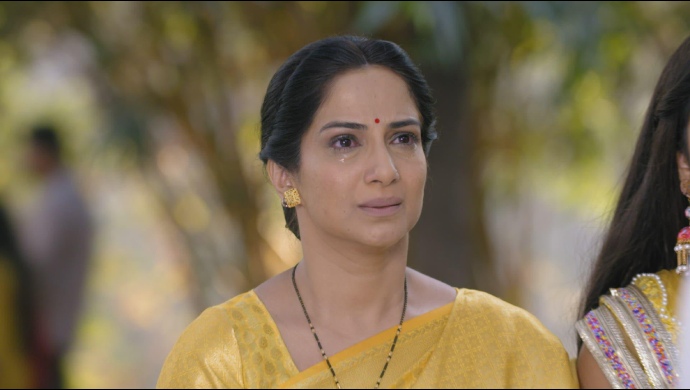 In tonight’s episode of Tujhse Hai Raabta, Sampada is tied to a chair with ropes and Kalyani threatens her again to get IVF (in vitro fertilisation) done. Kalyani tortures Sampada by blaring loud music in her eyes. On the other hand, Anupriya reaches where Atharva and Swara got married. They run from there but after a while, Rachit, who was unconscious, shows up.

Meanwhile, Kalyani makes a surprise photo collage for Malhar. She daydreams that even in old-age both of them will be together in deep love. When Rachit shows up, he has a bottle of acid/chemical in his hand. Scared, Atharva gives a gun to Anupriya to shoot Rachit because he threatens to throw it on Swara’s face. Anupriya shoots, and the bullet hits Rachit’s back. Malhar watches this as he arrives at the location.

In the next episode, After shooting Rachit, Anupriya is advised to run away and leave for Satara. But Kalyani stops her and says that her Aai (Anupriya) has not done anything wrong and Malhar will also understand this. But, Malhar arrives at the place and asks Anupriya to go to the police station with him. Will Anupriya go? Will Kalyani allow this to happen?

To know more, watch all the episodes of Tujhse Hai Raabta on ZEE5.

Don’t forget to catch up on all your favourite Zee TV shows on ZEE5!